Phase 1 is an important stage as it defines the concept for the scheme to be developed and confirms its potential to achieve project aims. The project team have used an objective-based appraisal to consider a number of high-level strategic transport improvement scenarios that could address existing and future anticipated problems in the network between Cork and Limerick. The objectives have been formulated by defining the deficiencies in the existing network, in particular the N20 national primary route which is predominately single carriageway.  Route capacity, recurrent congestion in urban areas and a high record of severe accidents are of particular concern.

Seven road-based scenarios have been identified based upon providing a new high-quality road between key nodes at Cork (the N20 at Blarney and the N25 at Dunkettle) and Limerick (the M20 at Patrickswell and the N24 at Ballysimon). A number of the scenarios use sections of the existing M8 motorway to the north of Dunkettle. All scenarios are based on preserving the existing road network to provide local access to communities.  Grade-separated junctions along the new route would provide for strategic access and interchange with the local road network.  The seven road-based scenarios are shown in Figures 1 to 7 below. 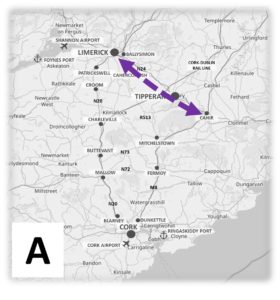 Figure 1: Road-Based Scenario A (new route in N24 corridor from Cahir to Ballysimon) 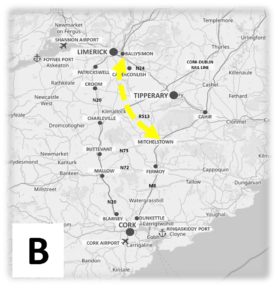 Figure 2: Road-Based Scenario B (new route in R513 corridor from M8 at Mitchelstown to Ballysimon) 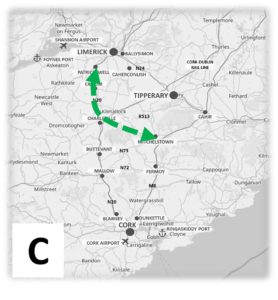 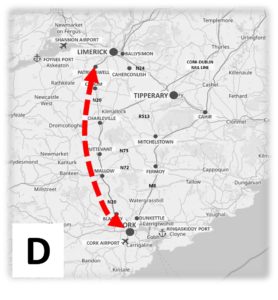 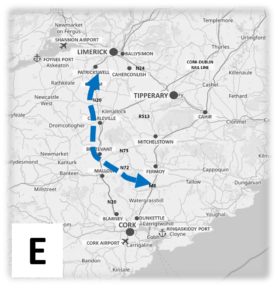 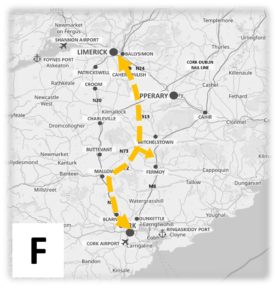 Figure 6: Road-Based Scenario F (new route in N20, R513 and N24 corridors from Blarney to Ballysimon with spur to M8 at Mitchelstown) 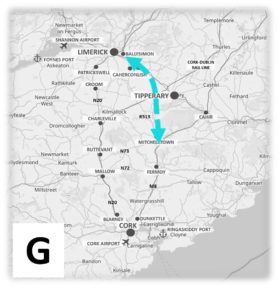 The National Transport Model has been used to predict the level of traffic that would transfer onto each of the proposed road-based scenarios and thereby provide traffic relief to urban areas experiencing the environmental impacts of through traffic. The modelling is also able to predict the improvement in journey time between Cork and Limerick, which is a key metric in determining the performance of the scenarios, particularly with respect to economic opportunities created in efficiently connecting the two cities.

The results of the appraisal confirm that the road-based scenario running in the N20 corridor (Scenario D):

The preferred road-based scenario will be carried forward to Phase 2 Option Selection.

There are two rail-based scenarios which are shown in Figures 8 and 9 and described below. 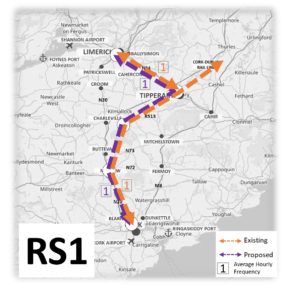 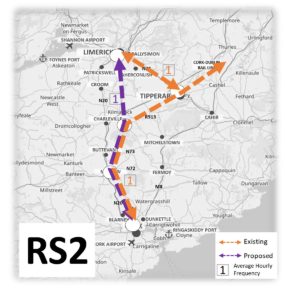 The two rail-based scenarios will be carried forward to Phase 2 Option Selection.

Any cookies that may not be particularly necessary for the website to function and is used specifically to collect user personal data via analytics, ads, other embedded contents are termed as non-necessary cookies. It is mandatory to procure user consent prior to running these cookies on your website.